Learn how we’re keeping you safe during COVID-19. 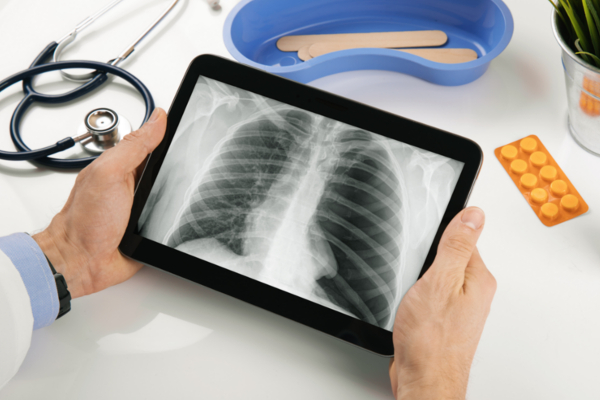 The first reports of EVALI emerged in late 2019. Within a six-month timeframe, a handful of cases reported to the Centers for Disease Control and Prevention (CDC) increased to nearly 3,000 and 68 confirmed deaths.

Yet identifying EVALI, in comparison to other respiratory illnesses, has proved to be a challenge. Individuals who regularly used vaping devices may have experienced shortness of breath, chest pain and other symptoms similar to a viral illness. As a result, some patients were being misdiagnosed with pneumonia.

After additional testing and CT scans, the diagnostic criteria for EVALI includes these symptoms, vaping within the past 90 days, abnormal imaging results and eliminating a diagnosis of infection due to injury or another illness.

While the affected patients tend to be relatively young, EVALI is not limited to a young adult population.

Background of the Study

The study published in the American Journal of Roentgenology examined 24 patients who met all EVALI criteria and had already been evaluated for other respiratory conditions. Nine of these patients went through a biopsy or other tissue removal procedure and a CT scan.

Based on this group, researchers discovered that the two most common findings of EVALI on imaging studies are ground-glass opacity and consolidation. Ground-glass opacity is a term used to describe the hazy gray areas that can show up in CT scans or X-rays of the lungs. This term comes from a technique in glassmaking, when the surface of the glass is blasted with sand to give it a hazy white or frosted appearance.

With ground-glass opacity, certain areas on a CT scan of the lungs appear whiter but do not fully cover the rest of the lung’s tissues.

Our lungs were meant to inhale clean air only. Lung consolidation occurs when the air that usually fills the small airways in your lungs is replaced with something else. Depending on the cause, the air may be replaced with a number of different things, including water, pus or chemicals. Consolidation, which appears as denser white areas on the scan, affected 42 percent of patients examined.

Researchers determined that these signs involved both lobes bilaterally and were occasionally accompanied by mild interlobular septal thickening and subpleural sparing, two patterns of lung disease.

In addition to these patterns, researchers noted that subacute hypersensitivity pneumonitis, a lung condition with flu-like symptoms, was the next-most prominent characteristic, present in 32 percent of patients. The CT scans also indicated the following patterns:

These radiological findings will be especially beneficial to physicians, helping them to determine potentially less invasive treatment options. A diagnosis may be made non-invasively, which may actually save patients from having to meet a surgeon.

Prior to this study, pathologists from the Mayo Clinic released a paper detailing the specific patterns of lung injury in patients who had been vaping. Particularly, injuries appeared around the bronchi tubes.

Another study published in the New England Journal of Medicine identified that many patterns of lung injury were seen on CT scans and chest X-rays, including:

Ultimately, CT scans are becoming essential in diagnosing EVALI. In most cases, CT scans can assist medical providers in formulating an accurate diagnosis of EVALI in patients without the need of biopsies and other invasive diagnostic procedures. CT scans may contribute to patients being diagnosed promptly, which is beneficial for patients to receive treatment expeditiously, so they may recover sooner from respiratory symptoms caused by EVALI. If you are experiencing any respiratory symptoms, contact your medical provider right away.

For EVALI, patients primarily with ground-glass opacity and no advanced symptoms start to see their condition improve after they quit vaping and undergo corticosteroid therapy. Without this data, patients may continue vaping, causing more advanced, irreversible damage to their lungs.

Has your doctor recommended you have a CT scan? Schedule your imaging procedure with Midstate Radiology Associates today.

ACCREDITED BY
THE AMERICAN COLLEGE
OF RADIOLOGY